The first known railway nursery in the York area was started around 1880 by the North Eastern Railway adjacent to the then new York North steam shed (now the site of the National Railway Museum). This produced flowers and vegetables for use in various sites in the York area, including the new hotel and station. The nursery moved to Poppleton in 1941 when part of the station’s goods yard was transformed into an area to produce food for railway workers' canteens and railway owned hotels. Wooden greenhouses, cold frames and an office were moved to the site from various locations.

After the war, there was a need to produce the shrubs and trees required to stabilise bomb damaged railway embankments as well as repaired railway building sites. However, this activity gradually changed and floral production became the mainstay of the nursery again. Bedding plants and hanging baskets were sent, or taken, to beautify stations which did not do their own gardening, eventually covering most of Eastern England from London to Berwick. Flowers and plants were also produced for ceremonial occasions. More unusually, the nursery also housed the red carpet and associated items which were taken out by nursery staff and used up and down the line for ceremonial occasions. Some of the red carpet is still stored at the nursery! 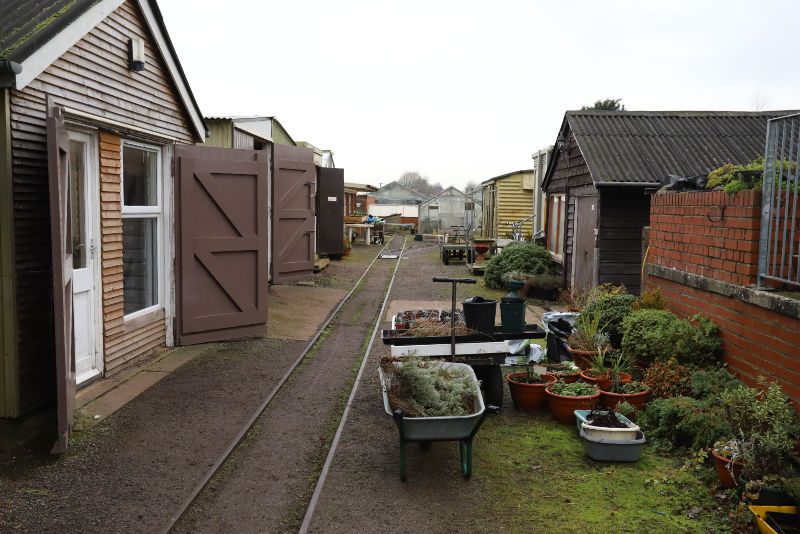 The nursery changed very little in the 1960s and 70s with costs kept down and just a few second hand railway buildings erected. It was not until the 1980s that British Rail decided to update the site rather than close it. Money was spent on new/replacement greenhouses and sheds and installing a gas tank system to heat most of the greenhouses, thus making many of the solid fuel stoves redundant. Eventually, in 1991, mains electricity was installed on the site. A two-foot gauge railway was built, using redundant rail and stock from other BR locations, to help move plants and compost around the site.

After railway privatisation in the mid 1990s the nursery passed to Railtrack. It was leased to Jarvis who took over the horticultural work and used the nursery as a base and office. They had contracts with railway operators and they also had to diversify to other places, such as the horticultural work carried out at several power stations and the Imperial War Museum at Duxford. The greenhouses and sheds had little maintenance as contracts were lost so, in 2006, Jarvis left the site and it was abandoned. However, a group of railwayman felt strongly that, this being the last railway nursery in the country, it should remain active. They called public meetings and set up a limited company, Poppleton Community Railway Nursery (PCRN), before the Nursery closed. These initial efforts were unsuccessful but a small number of individuals persisted and, after the formation of a new board of directors in 2009, PCRN was granted a tenancy of the site from Network Rail. Jarvis paid for a fence between the nursery and the railway (which enabled access for non-railway staff) so the nursery is now run by a volunteer group as a not-for-profit company and became a registered charity in 2012.

Having been unoccupied for a few years, the site needed a lot of work to get it up and running again. This is very much an on-going activity, but considerable progress has been made renovating existing buildings plus construction of new facilities. The railway continues to be upgraded and is now a popular attraction in its own right.

PCRN has a successful partnership with the NHS in the York area which has long found horticultural skills training to be therapeutic for adults recovering from mental health issues. Other partnerships and community projects are undertaken from time to time depending on the availability of funding and volunteer support.

Today, the nursery is thriving, serving the needs of both the local community and the wider York area. It has survived the Covid restrictions and has helped people mentally after the lockdowns. We now look forward to the future with confidence and enthusiasm.