The railway that never was

In the Second World War the Allies built decoy military facilities (airfields, army camps etc.) which would appear from the air to be bona fide facilities in the hope that German bombers would attack them instead of the real facilities. An Aerial Archaeologist, Anthony Crawshaw, discovered there was a decoy airfield near to Poppleton.

Information about this facility from Anthony Crawshaw and the Ministry of Defence has been passed to the Nursery by Nursery member Roger Backhouse. 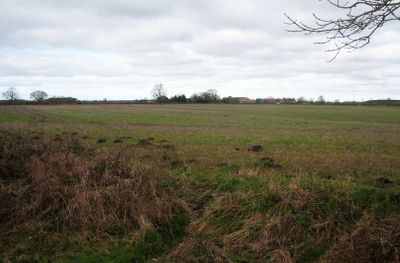 Anthony Crawshaw has provided notes about the site from the National Archives, here is a brief history of the site.. 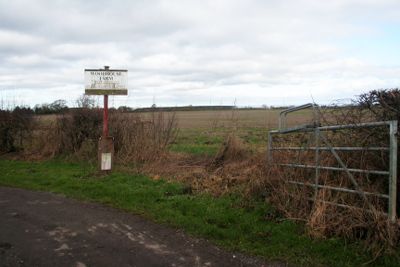 2017 view showing approximate location of Poppleton decoy control shelter, the actual decoy was in the field behind 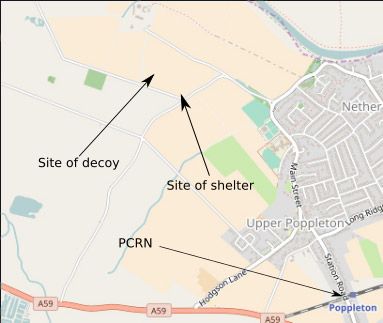 We have copies of instructions of decoys, not all are relevant to Poppleton. Decoys came in two types, those using electrical lights, known as QL, and those using fires, known as QF. Poppleton was a QL.

At the start of a shift the Operator was to ring the Deputy Chief Controller in the York District Control to test the phone line, the Controller was then to ring the Operator back. Air Raid messages were to be passed to Operators by telephone. The Operators were only to light the lights on receipt of telephone instructions. The lights, however, were not be lit at a time when hostile aircraft would be able to see that there were no railway lines in the immediate vicinity, as, for example, during certain phases of the moon. After the lighting had been switched on, one of the Operators would go on look-out duty and be sufficiently far from the noise of the generator to be able to hear the aircraft in the vicinity. When aircraft were heard in the vicinity or overhead, the Operator would extinguish the main lights, leaving the leak lighting. The number of bombs heard falling was to be logged. It was important that the enemy did not see the lights going on. Controllers would therefore arrange to light up on all suitable nights. The lighting of the decoy was left to the discretion of the Controller but would be lit for periods of ½ - 1½ hours at a time with a total of 3 - 5 hours a night.

These decoy locations were, of course, top secret and suspicious unauthorised people in the vicinity of the site were to be reported. There is a particularly humorous entry in one of the documents relating to security:

"In country districts the local inhabitants soon find out about a decoy, chatter about it amongst themselves and then forget about it. The chief danger in the country is the pompous country house owner, male or female, who considers that any additional risk to his or her person must be due to muddling by the bureaucracy. They frequently protest through various channels including MPs and Ministers. They discuss the iniquity amongst the county families. Considerable information has to be given away in answering these egotists, and in consequence many sites obtain an undesirable degree of publicity."

The use of the lighting on the decoy was the most important part of the decoy, asthe whole purpose of the site was to create an illusion in the minds of enemy aircrew of something that really wasn't there. The exact moment for turning out the primary lighting was to be carefully gauged by the look-out man. Visibility and the height of the aircraft were to be taken into account and the enemy were to be given plenty of time to see the full lighting and be allowed to approach quite close, but before he was to pass over he should see the primary lighting go out. There are particularly notes about the object of the lighting:

"The object of turning off the brighter lighting is to imitate the turning out of railway and other lighting which takes place in railway yards, etc. on the approach of enemy aircraft. A great deal depended on the skill with which the Operators at any particular site manipulated and timed their lighting so as to make sure: first, that the enemy sees the primary lighting, and secondly that he sees it go out. Decoy lighting in Germany is often detected by our own pilots as dummy either because the lights are turned on as our pilots approach or because they are left on as they go over."

If the enemy aircraft flew round in the vicinity of the site, the lights were to be kept at the residual, as soon as the aircraft had departed the primary lighting was to be turned on again, provided no other aircraft were in the area.

It must have been an unnerving experience to be on duty at the decoy while enemy aircraft were flying around possibly dropping bombs. We have no information on whether the decoy attracted enemy attention or how successful it was, however the fact that the site was closed in 1943 and a new site used on the South East of York suggests that perhaps it was in the wrong place. Maybe decoys were changed to reflect the changing circumstances of war as happened with real military locations.

If you have any further information about the Poppleton Decoy please contact the Nursery.